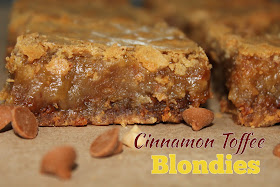 Oh my how the words Cinnamon and Toffee in a recipe for a sweet treat makes me soooo happy. I made these a couple weeks ago, but obviously am craving some more because I swear I can still taste the sweet flavor of these blondies every morning when I have my coffee. Around the Holidays I made these Cinnamon Toffee Oatmeal Cookies

So when I was pondering and anxious to make a blondie of some sort, because I had never made a blondie before..I know..gasp; I knew they'd have to have cinnamon chips and toffee bits in them. I had never made blondies before but knew I wanted them to be oooey and chewy and not cakey. Yum 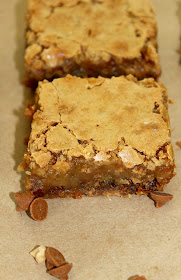 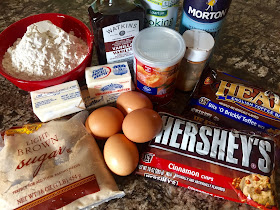 Directions
Preheat the oven to 350 degrees. Line a 13x9 inch pan with parchment paper and spray all sides and bottom of pan well with cooking spray. In a medium saucepan, heat the butter, brown sugar until melted and set aside. In a medium bowl, mix the flour, salt, baking powder and cinnamon until just mixed. In a large mixing bowl, beat the eggs and vanilla slightly with a fork, add the brown sugar mixture and slowly add the flour mixture until just combined. Stir in the toffee bits and cinnamon and spread evenly in the pan. Bake for about 35 minutes or until the top starts to brown and crackle. Cool completely, then cut into squares. 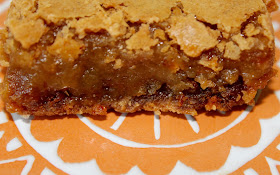 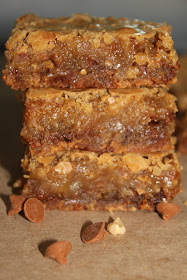 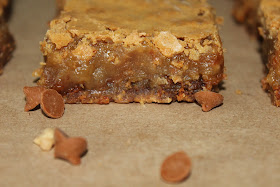 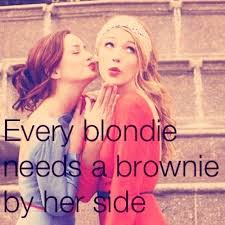 Thank you for taking the time to Browse my Blog. Your comments mean the world to me and I treasure each and every one!! xo